Yes it is. It’s that time once again. My gigs for the year are done. The next ones are on Friday January 9th in Whittlesey near Peterborough an’ then on Saturday 10th I’ll be in Oakham.

It’s been a busy year considerin’ I had a heart attack in February just around the time I was hopin’ to get ‘Some Days Are Diamonds’ ready to put out in May. The album is still nearly finished with just a few folks to record their parts. Gettin’ folks into the studio when the studio guy has tourin’ commitments as do some of the folks due to record is a juggle that I havn’t mastered. It will get there but it’s become a ‘It’ll be done when it’s done’ thing. I AM hopin’ to have it ready for May 2015, one way or another.
In the mean time here’s a couple of videos for the tracks Samaritan an’ Airboats, Guns & Whisky which appear on the album.

Back in February again…. I was out of hospital a couple of days after what many call an ‘episode’. Call it what it is !!! It’s a heart attack. These things can kill you. An episode is part of a TV series. A small bit of advice here. Chest pains ? Get it bloody checked out soon as. No messin’ about. If in doubt call an ambulance. No one, not no one is gonna bitch at the hospital or in the back of said ambulance because you made a mistake. Oh an’ don’t take a taxi to the hospital whilst clutchin’ your chest, taxi drivers it seems don’t like that.

Anyhow, havin’ had an angioplasty (which is nothin’ like a Cornish pasty) an’ 36 hours or so under the scrutiny an’ care of various superb doctors an’ nurses I was allowed home. I had a song written about the experience in a couple of days an’ recorded it as one of my ‘Garage Videos’ a week later. I sounded totally washed out, out of breath an’ strugglin’ to catch it at the end. I was worried as were some folks that saw it. Recovery went well over a couple more weeks though an’ I re-recorded it again. It’s called Dodged A Bullet. An’ I had.
My first gig back after the heart attack was at The Boileroom in Guildford with my good friends Leatherat an’ The True Deceivers. It’s a gig we’ve played for a few years now an’ always a pleasure. That was nine weeks later.

After that the rest of the year seems to have flown by. I wasn’t expectin’ to be giggin’ much but there’s been a fair few festivals an’ bike rallies. It’s been great spendin’ time with mates, not drinkin’ an’ chattin’ through ’til dawn too much but enough that I’ve had the pleasure of some crackin’ company. I had nine days out in Germany playin’ as well, it was lovely to be back out there, playin’ for the first time solo an’ I’m back there in Berlin the first weekend in February next year for a couple of gigs.

Dates are comin’ in for 2015. If you have a venue nearby you’d like to see me at or you fancy puttin’ on a nice intimate an’ somewhat informal house gig get in touch via the contact page on here.

In the meantime I wish you Season’s Greetings an’ all the best for next year an’ I’ll leave you with one more video. A cover by Tracey Browne an’ myself of The Pogues Fairytale of New York recorded back in 2011 to raise funds for the bikers charity that I am a patron of, the NABD (National Association for Bikers with a Disability). The puppets used for the video are regular an’ well loved performers on the bike rally circuit. 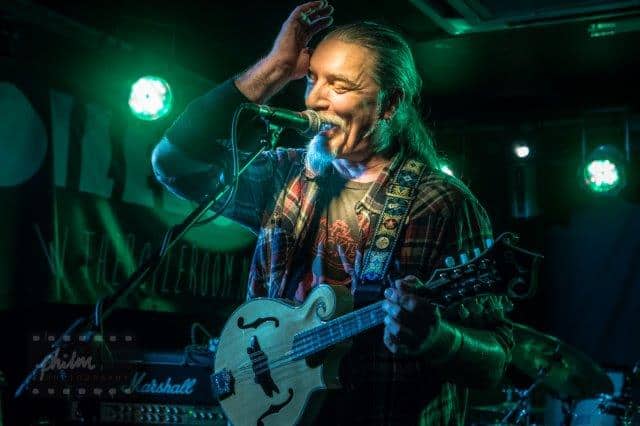 At The Boileroom. April 2014 by Philip J Mitchell